Although jokes exist in almost every part of the world, they are not universal. They are culture specific and sometimes narrows down to a small group of people or a geographic location. Unless the audience is familiar with the context of the joke, they might not find the fun in it. Jokes require subtlety and artistry in their design and delivery so they disappear when dissected (Holistic Approaches to Jokes, p. 115). This paper will focus on a single-frame cartoon from the United Arab Emirates (UAE) and provide its holistic context, outlining the cultural aspects that the listeners need to know to have a better understanding of it. Particularly, it will give a description of the UAE culture that the joke (cartoon) targets (poking fun at). Since jokes relate to people, this assignment will describe the Emiratis who are likely to find this joke funny and those who may view it as annoying. A review of the aspects of the joke (cartoon) that require the longest analysis will also feature. The last section of the paper gives the author’s verdicts on the way to make the joke funnier or easier to grasp. 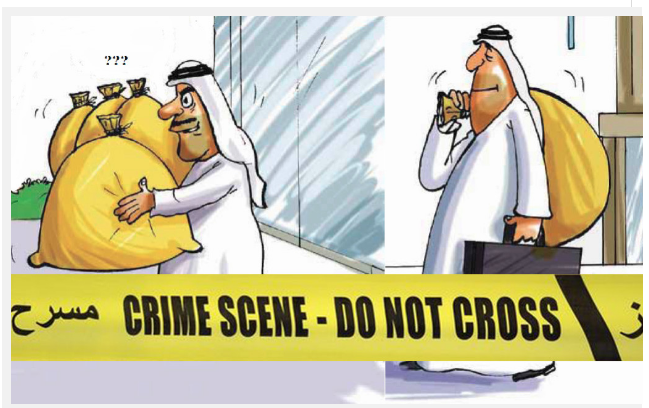 Figure 1: A Cartoon of Khadir Ahmed Abdulla Abdul, a police officer from the Abu Dhabi Police dressed in plain clothes, and his Emirati landlord, Hassan Saeed Hassan, in a shameful looting incident.

The picture above is a 2015 cartoon of a real-life incident which occurred on October 26, 1995 – the day when a police officer from the Abu Dhabi Police dressed in plain clothes participated in shop burgling, looting valuables and money worth $ 4 million. The issued was reported to the authorities and handled by the Abu Dhabi’s Apex Court under the Case Number 188 in 1996. The victim (widely referred to as the Judgement Creditor) is the creator of this cartoon, which he uses to mark the 20th Anniversary of the actual event.

Although the fact that the picture above depicts an incident that occurred in Abu Dhabi makes it Emirati, other aspects make it a feature of that culture too. One of the UAE cultural elements in the cartoon is the language. The "Crime Scene – Do not Cross" tape is also written in Arabic, which is the official language of the United Arab Emirates. The “plain clothes” worn by the men (Khadir Ahmed Abdulla Abdul and his compatriot Hassan Saeed Hassan) in the picture are the ‘official’ wear for men in the UAE. The long white robe which has various Arabic names (dishdash/ dish-dasha, gandoora/ gandurah or tawb/ taub) and the headscarf (keffiyeh) are the official/traditional dressing codes for the Emirati.

These two factors make the cartoon UAE-specific as it is only the people of the UAE who wear and speak the language and dresses in the picture. Besides them, there are no other vivid factors that make this joke (cartoon) UAE-specific, but the context and story it depicts underline some things that one can readily associate with the United Arab Emirates. The world believes in the conspiracy that the UAE is a place of "money and gold." The latter could be the “valuables” – probably, the ones carried in the yellow bags – while “money” is part of the total value of lootings – the ones carried in the black briefcase in the picture. Although Khadir Ahmed Abdulla Abdul and his compatriot Hassan Saeed Hassan looted (stole) from the shop in which case they should move in a hurry to get away from the scene, they seem to walk majestically. One can deduce that the situation is a depiction of the luxurious lifestyle (slowness, calmness, and the ‘unshakable’ tag), which people associate with the Emiratis.

This cartoon (joke) is UAE-specific, but it may not amuse all the Emiratis. The residents of Abu Dhabi are likely to find it funny as it mocks the police force. Usually, the people (civilians) enjoy almost every joke about or directed towards the administration, meaning that they will find this cartoon funny. At the same time, not all the Emiratis will have a similar opinion. The police force and other administrators will not find it amusing. They will feel that such a joke (cartoon) does mock not only the city's maintenance of law and order but also gives a negative portrayal of the place. For them, such an incident is an embarrassment and a signal of the fact that the city does not have a proper police system to protect the people.

The picture (cartoon) gives a hint of what needs further review by posting three question marks on top of the four yellow bags carried by the man in front. An analysis of the actual incident reveals that the bags contained the "valuables" while the black briefcase carried by the person behind has the money that the two men looted from the shop. The contents of the bags and those of the briefcase are crucial to determining the value of all the items and money that were stolen from the shop. According to reports of the actual event, the looters went away with money and valuables worth $4million. If the cartoonist could explain what the “valuables” were, then one could use their values to get their portion of the $4 million.

If the "valuables" are golds, then their weight would help in determining the amount of cash that they took from the shop. The contents of the bags need much explanation because they are the causal factor of the actual event. Khadir Ahmed Abdulla Abdul and his compatriot Hassan Saeed Hassan masterminded the looting and it highly likely that they targeted the “valuables” with their plan. Similarly, the victim must have also thought about them when creating the cartoon of the incident 20 years later. Unfortunately, he failed to specify what they were in his work. Had he specified what the bag contained, the audience would have more details about the joke.

Seeing two men carrying bags and a briefcase behind the “Crime Scene – Do not Cross” tape is funny for more than one reason. Not only does it show that they crossed the “Do not Cross” line, but also take some things (tampered with the evidence) from a “Crime Scene.” Nonetheless, a few alterations can make the joke funnier. If I were the cartoonist, I would draw a police cap on the head of the cartoon that represents Khadir Ahmed Abdulla Abdul. Alternatively, I would paint both his dishdash and keffiyeh in the same color as that of the Abu Dhabi Police’s uniform or draw the cartoon that represents him with a gun.

Not only would any of these alterations make the picture funnier, but also add more information to the joke, making the audience know that one of the men who "crossed" the yellow tape and tampered with evidence was a policeman. Going by my first option, this alteration reflects the fact that one of the men in the picture is a police officer. Adding a police cap will result to a cartoon of two men with plain clothes (dishdash and keffiyeh) with one having a police cap, in which case it will identify one man’s profession (police officer) and culture of everyone in the picture (dressing code and the Arabic writing on the yellow tape). In this case, my alteration does not change the context of the joke as it only adds extra information.

Jokes exist in almost every part of the world. However, that factor does not mean that all of them are universal. They seem both culture- and location – specific, meaning that one has to know the context of a joke to understand it. This paper gave a holistic approach to understanding jokes by focusing on a carton of Khadir Ahmed Abdulla Abdul, a police officer from the Abu Dhabi Police dressed in plain clothes, and his Emirati landlord, Hassan Saeed Hassan, in a shameful looting incident. Although the discussion revolves around the Abu Dhabi event, it applies to any holistic study of jokes.

How to Cope up Following a Break-up