The Influence of the Ancient World on Later Societies

The evolution of people’s imagination of the world and wise discourses about basic survival elements led to the development of society as we see now. Until recent centuries, Europe was the central imperial point of the world that hosted cultural elements from all over the world. Consequently, philosophical, political, economic and legal approaches did not develop independently, but in coherence with the demands of society. Despite multicultural impact on Europe from the outside and variety of the inside populations, the most powerful empires affected further development of society. The paper provides evidence that ancient Roman, Greek and Mesopotamian states significantly contributed political, legal, economic, religious and individual ideas in Europe.

Historically, the first form of explanation of the new social reality was religious and mythological interpretation of the nature of power relations and social hierarchy. Later, the political thought refused from mythological approach and took rational form. When considering issues of power and social order, there is necessity to apply to philosophical and ethical approaches of Confucius, Greek philosophers and within the political and legal thought of Rome. Confucius rejected the idea of the divine origin of the state and developed the concept of patriarchal aristocratic state. According to his teachings, the state comes from associations, families and likened to a family where the emperor is a father who cares for his subjects - children.

Philosophers of Ancient Greece promoted creation of the statehood in the form of policies - a small city-states and surrounding settlements. This period brought up the first version of modern democracy, including the census one. Ancient democracy provided free participation of males in the national assembly and decision-making, legal equality of citizens, and the right to fill the elective public office. However, this form of ruling did not satisfy supporters of aristocratic dominance (Pythagoras, Heraclitus, and Socrates). They believed that only the best people with high virtue and wisdom could satisfy the demands of the stable state. This led to creation of oligarchy – “the rule of some or a few, which usually implies their rule over the many, in the sense of a body of poor native-born citizens whom they exclude from offices and civic honors”. In the prospect of affection of nowadays, both forms take place, but aristocracy has particularly became formalized and gained a new term – an elite.

Plato provided an outstanding contribution to the idea of government. His approach kept its leadership until the era of New Times. The philosopher associated government and politics with the human forms and state. The three parts of the soul of a man (intelligent, dedicated and willing) meet three associations: a) rulers, whose advantage is wisdom; b) soldiers, who have distinguished bravery; c) manufacturers (artisans, merchants, farmers), who feed own stomach and emotions. Plato expressed possible danger of excessive freedom that can lead to most severe slavery. Many dictatorships arose from the crisis caused by collapse of the relationships between people and anarchy. The great revolutions inspired by the idea of democracy ended up with dictatorships: the Jacobin dictatorship and empire of Napoleon in France, the dictatorship of Cromwell in England, Bolshevik dictatorship in the USSR etc.

Marcus Tullius Cicero preferred a mixed state form, simultaneously combining royal (monarchy), aristocratic and democratic elements. Cicero saw an analogue of this rule in the Roman Republic. The distribution of powers was provided between masters and above all consuls, responsible for overall policy and army (the imperial principle), and the Senate (the aristocratic principle). Cicero’s statements on legal association of citizens and legal regulation of the distribution of powers between republican institutions formed the theory of the rule of law.

The Effect on Legal Systems

Majorly, the European legal practices became a consequence of influence of the Ancient Greece, Rome and Mesopotamian epochs. Looking on the map “Ancient Greece (c. 750-338 B.C.E.)”, and “The Roman Empire from Augustus through Trajan”, it becomes obvious that “geographical location” “territory” and inhabited “occupation” promoted influence of Greece “all over Europe”: 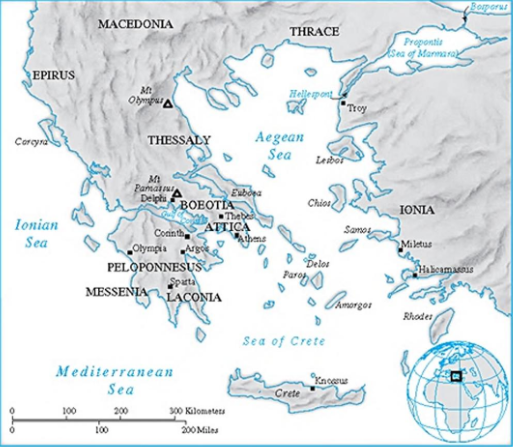 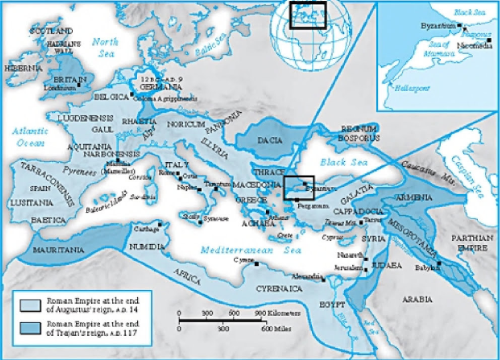 The Roman Empire from Augustus through Trajan

For instance, the formation of sophists promoted philosophical trend, which was based on the idea of the relativity of knowledge (relativism). Comparing the constitution and laws of different policies, they claimed that any thing or phenomenon can be seen in two ways, and with mutually exclusive positions. The main thing in sophistry was opposition of the nature and statutes (laws and customs). Sophists believed that if settings are biased to change as they are generated by people and reflect the interests of various groups, than nature is unchangeable. This postulate became the basis of the natural law.

Similarly to sophists, Socrates distinguished between the natural law and positive law, but unlike them, he believed that natural law and positive law depend on mind. The meaning of this point is that what is legal must be true, that is why the laws of polices are canonic, and it links the unanimity of citizens. Plato emphasized that the laws established for the common good of the entire state as a whole, but not for a limited group that seized the power. He approved strict laws that strictly and in details regulate public and private life. Any state ceases to be as a state if its courts are not properly organized and citizens are not involved in general administration of justice. Later, Aristotle critically considered law as an equality, because people are not equal in their dignity. Legal scientists still maintain his division, when natural law always has same values and does not depend on (non)recognition of it.

The Mesopotamian Stele of Hammurabi is the first written collection of laws. It includes debt policy, family and marriage relations, punishment for infidelity, male property rights, inheritance, divorce etc. The court was tried by priests, they could call witnesses who testified after bringing oath. Vast heritage of the Ancient Roman lawyers is a sample subject that lied on the basis of the majority of Western legal system and texts regulating state and civil relationships. One of the most outstanding works is named the Justinian codification, which includes: institutions (coverage foundation of the Roman law); digests, that consists of the works of 38 Roman lawyers; and the Code of Justinian (collection of the imperial constitutions). Early Christianity has also affected the future of legal concepts, where moral and religious principles had got legal and detailed in law, order and punishment framework.

Economy as a science appeared in the Ancient East, when in the depths of subsistence east slavery (Asian mode of production) the scope of commodity-money relations expanded. Consequently, the problems of coexistence of the state, communal and private property became actual. The common feature of economic thought of the ancient world is the desire to preserve the priority of subsistence farming. The major trade and usurious transactions were condemned from the position of manners, morals and ethics. The point of blames was that it violated the supposedly equivalent and proportional nature of the exchange of goods protected by civil laws.

A vast heritage came from Ancient Greece (Xenophon and Aristotle). They stated consequence that defined the future of economy as science, proving that its purpose is to meet vital human needs. Consequently, the economy should be the subject of concern for the state. Aristotle believed that the exchange of goods (the sale) is the act that meets the needs and treats the use-value as a category of economy. Manning and Morris presented a graph that “postulates economic growth” with a large-scale trade, which aims to obtain a huge profit, sharing act symbolizes the ability to amass money. 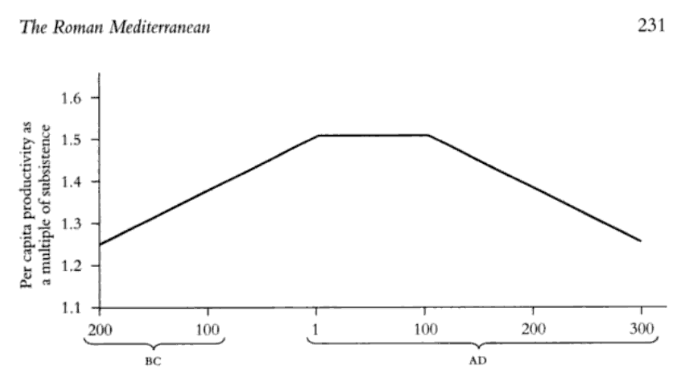 Regularity of the Ancient Roman economy

However, the prototype of modern banking system – usury – Aristotle denied as an unnatural activity, because money and property can lose their true purpose for which they were created. Money were provided for exchange trading, and percent recovery leads to increase of money itself. Nevertheless, Ancient Greek affected modern economy through correct questions that required answers, specifically in the issue of what is cost and how it should be defined.

The Role of Individual and Religion

The migration of ancient religions based on pagan beliefs and rituals affected the approach to honoring the divine creatures and establishment mutual contact. Again, on European pre-Christianity epoch, the largest impact was from Mesopotamia, Ancient Greece and Rome, and the last two states had quite similar hierarchy of gods, mythology and even cults. In Mesopotamia, the requirements to a private individual were minor: prayer, position, and all sorts of restrictions and taboos were imposed only for the king. Public religious actions such as moves and holidays represented a single line of connection between man and deity. The manifestation of religious feelings of the individual was formal: there was no personal nature.

During its development, Greek and Roman mythology gains not only religious, but also literary and artistic value. It became a fundament for the realistic art not only during the times of antiquity, but it continued until Renaissance and up to our times. Greeks and Romans carefully treated the implementation of religious regulations, and participation in religious cult was compulsory for all citizens. Greek anthropomorphic representation of their gods caused attitudes to them: for them, the gods were humanoid creatures who wanted same things as people. The Gods transmit power to mortal rulers or continue to be arbiters of global affairs along with these mortal rulers. Thus, religious hierarchy defined the role of individual by himself when everyone has equal access to religion, but deities communicate through selected leaders. Despite the epochs of divine kings has passed (only in several countries formal monarchy exists), the reflex of social division left. However, it should be considered not isolated only as religion, but in complex with philosophy and politics, which made the prototypes of individual in modern time.

Thus, the Ancient Roman, Greek and Mesopotamian scientists made the major impact on establishment and development of the later social order in Europe. Geographical condition and approach to the issues of government, law, economic, religion and role of individuals/citizens promoted authority of those empires. Even nowadays, the classical models of the state order function by the basic principles discovered in ancient times. Nevertheless, the peculiarity of this scientific success is in complex approach to issues that include pragmatism, spirituality and ethics. This knowledge is vital not only for current existence of society, but prediction for future generations.

The Effects of Social Media on the Freedom of Expression

The Significance of World War I