Since the onset of industrialization stress on the environment has become more pronounced and hazardous. Each country has found itself under attacks of aggressive agents such as heavy metals in waste polluting water and soil, fossil fuel emissions in smoke from factories polluting air. Acid rain is one of the most significant and visible outcomes of air pollution. Currently China is one of the most polluted countries in the world. What the West passed in the nineteenth century, China experienced thirty years ago when it began its rapid industrial development. London had its share of smog and coal dust everywhere more than a hundred years ago when the English coal industry was developing. The US and Canada suffered from acid rain and began cutting on SO2 emissions when they recognized the problem in the 1980s. China also has had coal as its primary energy source and the same environmental problems as a result. The subject of the present paper is acid rains in China, the reasons for this phenomenon and possible solutions and actions in this direction.

Acid rain is formed from pollutants that are accumulated in the atmosphere and rainwater; as a result, acids are formed and they fall down as precipitation and further pollute water and soil. The main culprit of acid rain is air pollution and emissions from fossil fuels. When plants, factories and vehicles release combustion gasses, such as sulfur dioxide (SO2) and nitrogen oxides (NOx), from coal and oil into the atmosphere, these pollutants turn into H2SO4 and HNO3 and are carried by aerial currents for many miles around the place of their emission. The transformed pollutants can be returned to the land either “precipitation (wet deposition) [or] as gas and particles (dry deposition)”. Getting back into the soil, acid rain gets into water systems, underground waters, etc.

ince coal is widely available in large quantities in China, the country chooses it as the major energy source over environmentally cleaner natural gas. In 2004, coal generated “69% of the energy production” and the rest was largely taken by oil, which also causes significant air pollution. In 2005, China “produce[d] and consume[d], about 1,900 million metric tons of coal a year”. However, Chinese coal has a higher sulfur contain and it means that air is more polluted with SO2 (sulfur dioxide gases) than it could have been. Even though “[t]he national average content of sulfur in the coal [of] 1.1%” is large enough, in certain areas it reaches 4%. Given the constant growth of China’s industry, the air pollution is getting worse as well. Each decade the amount of sulfur dioxide gases in atmosphere doubles. For example, in 2003, China’s total emission of SO2 is as twice as much as America’s and slightly less than Europe’s and makes up 22, 10, and 17 million tons a year correspondingly.

Acid rain has several outcomes such as soil and water acidification and forest dieback. Water acidification has a direct damage to fish and water animals. Fish find the water too toxic and die. It can also affect animals who consume fish already poisoned by acid rain. Forests react to acid rain by a loss of their leaves and needles, by becoming less resistant to frost and disease, by taking fewer nutrients from the soil, and by getting unable to reproduce.

In China, coal-consuming industries and coal-producing plants are mainly localized in the East and the center of the country. Therefore, SO2 pollution is heavier in these regions. For example, in comparison with China’s northern and western regions, the eastern and southern regions have five times more emissions of SO2. Figure 1 shows the acid rain map of China in 2010. South of the Yangtze River and the Chongqing, Sichuan and Guizhou provinces are the areas with the heaviest rate of acid rain.

The 2006 study on acid rain by Thorjørn Larssen and his colleagues revealed significant forest damage and in some cases even loss of trees. Due to acid rain and mist, Chongqing experienced “extremely high concentrations of gaseous SO2 and/or HF” and as a result a significant loss of leaves and needles, high tree mortality. Water acidification is also noticed in the area but it requires additional research to study and conclude.

However, acid rain and air pollution in general have a different effect on human health and environment. The fact is that acidification of water and soil can be neutralized by alkaline dust formed naturally in the desert or industrially from limestone formation in industrial and construction activities. Thus, acid rain in northern China can be neutralized by alkaline dust from the desert whereas southern China has no such advantage and “alkaline dust from coal combustion, cement production, and construction activities” is not enough. In southern China, the level of alkaline dust is rather high, yet it does not neutralize acid rain in the region and pH of the soil is 4, which is not very good. However, without alkaline dust it would have dropped as low as 3. Yet alkaline dust can be harmful too and can cause serious health damages. Therefore, despite it obvious positive characteristics in combating acid rain, “it is likely that measures for reducing [the level of alkaline dust] will come before reductions in SO2 emissions”.

In China, the understanding of environmental issues is competing with the desire to continue economic growth. The country has a high demand on electricity and other energy sources. For example, the Guizhou province is one of the most polluted yet it is one of the poorest in the country and therefore there are plans for economic development of the region, and “many new coal-fired power plants will be built in the near future”. Therefore, there is a possibility that the government would choose economic development over environment protection at least for the time being.

However, there is a set of measures that can mitigate the impact of acid rain. Larssen and the colleagues report that the today’s policy aims to reduce fossil fuel emissions by 20% in the area of active acid rain. However, this policy does not take into account the fact that China is trying to develop its other regions as well. So while the level of acidity would drop in the controlled area, it could increase in other regions. Furthermore, the world community is exerting pressure on China and it has to do something about air pollution. Alternative sources of energy are one of the solutions. The possibilities to use natural gas and nuclear energy should be explored. For example, India opted to use the existing nuclear power plants and China can try it too. Yet China has to begin with a more active approach and make environmental issues their priority. Then national policies would require big players do their part, reduce emissions and opt for cleaner energy sources.

umming up it can be said that acid rain is a serious environmental issue in China and the government is aware of the problem. The country’s southern and southwestern regions are more affected by acid rain due to a concentration of heavy industry releasing the major part of the country’s share of fossil fuel emissions. To some extent, alkaline dust is able to neutralize the damage from acid rains and it is done in western and northern regions of China, but in southern regions alkaline dust is not enough. Even though there are researches about acid rain and scientists monitor the state China’s forests and water sources are in, so far they did no significant measures to decrease the use of fossil fuels in industry and vehicle use and thus influence acid rain in the country. 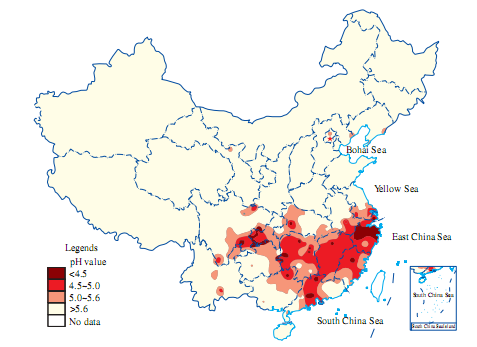